Rethinking No Man's Land: Sanctuaries in the Urban Dead Zone

The City Talks: Noam Leshem on Rethinking No Man's Land: Sanctuaries in the Urban Dead Zone

In Western cultural memory, ‘no-man’s land’ commonly invokes the killing fields of the First World War. But the story of no-man’s land does not end in 1918. Violent conflicts have created a variety of no-man’s lands, from demilitarized zones to unclaimed border regions. Other areas have been condemned as no-man’s lands because of environmental disasters and ruination. The 30km exclusion zone around Chernobyl is perhaps the most obvious example, but evacuated mining towns in Australia and military sites in North America offer equally important insights into the production of such spaces. Today, no-man’s lands continue to haunt our political landscapes, but rather than far flung border regions, they take the form of urban ‘dead zones’, sites governed by abandonment and enclosure. In this talk, I revisit the no-man’s lands of the present, and rethink their simultaneous function as sites of exclusion and harbours of new forms of sociality and solidarity. 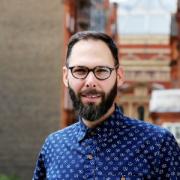 Noam Leshem is a political geographer at Durham University specializing in geographies of ethnic and urban conflict. His current research focuses on the cultural and political history of No-Man’s Land, and the contemporary significance of these unique, yet under-explored spaces. He is the author of Life after Ruin: The Struggles over Israel’s Depopulated Arab Spaces, which considers the survival of Arab-Palestinian spaces after the 1948 War (Cambridge University Press, forthcoming [2016]). In 2012 he was awarded the Leigh Douglas Memorial Prize by the British Society for Middle East Studies and most recently held the Royal Geographical Society’s Thessiger-Oman Fellowship.

This City Talk was co-sponsored by the European Union Centre of Excellence at the University of Victoria.