Beyond the Postcolonial City? India, Indigeneity, and the Modern City / Panel: The Bengal Lounge Debate—History, Empire, and the Contemporary City

The City Talks: Beyond the Postcolonial City? India, Indigeneity, and the Modern City

This City Talks event will consist of a presentation by Neilesh Bose followed by a panel discussion on the implications of closing the Bengal Lounge for rethinking the imperial legacies of contemporary urbanism in Victoria, British Columbia. Neilesh's presentation will offer an overview of the role of company-states and empires in modern urban history, from a look at the origins of divided urban spaces in seventeenth-century Company India to their transformations in tandem with a growing colonial order in eighteenth- and nineteenth-century India. With a focus on London and Calcutta as linked urban spaces in the eighteenth and nineteenth centuries, this presentation introduces how the development of urban space relates to modern science, public health and sanitation, and the modern conception of race, as well as the global circulation of value through real estate speculation. Finally, the presentation will conclude by noting how the urban space of Calcutta in Company (1757 – 1857) and colonial (1858 – 1947) India transformed from a place of opulence and wealth, as well as geo-political strategy and power, into a model of racial segregation. 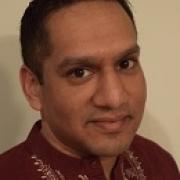 Neilesh Bose’s research and teaching interests include the history of modern South Asia (the Indian subcontinent), the British Empire, decolonization, and the history of diasporas and migrations. In addition to working on local histories grounded in requisite languages, archives, texts, and practices in South Asia, he simultaneously teaches and writes about the intersection between local histories and global processes, such as modern empire, decolonization, and comparative processes of nostalgia and memorialization. Additionally, he hold interests in theater, performance studies, and popular culture. Neilesh’s first book examined the intersections between linguistic identity and Muslim religious community formation in late colonial Bengal. His current project explores the history of religious reform in colonial India and the ways that Indian religious reformers studied local religious practices in the service of a broader universalism. He earned a PhD in South Asian history at Tufts University in 2009 and has taught at the University of North Texas in Denton, TX, and St. John’s University in Queens, NY, before joining the University of Victoria in 2015 as Tier II Canada Research Chair in Global and Comparative History.