Suspect Properties: The Vancouver Origins of the Decision to Liquidate Japanese-Canadian Real Estate

When people of Japanese origins were uprooted from British Columbia’s west coast, they were assured that Canada’s Custodian of Enemy Property would “protect and preserve” their homes and farms for the duration of the war. By the spring of 1943, however, the government was hastily selling all Japanese property, including almost 2,000 parcels of real estate. What had changed? Were the assurances of 1942 deliberate lies? Was the liquidation of property part of an attempt by racist British Columbians to rid the province of the Japanese, once and for all?

Professor Stanger-Ross argues that to answer these questions, we must undertake a history of the city. The policy discussions that would lead to the liquidation of Japanese-Canadian property began in guided tours of former Japanese neighbourhoods in Vancouver. Racial ideology interwove with ideas about neighbourhood and property to convince bureaucrats that they had defensible grounds for the liquidation. Because of their ideas about city life, officials could rationalize liquidation without explicitly invoking racial antagonism, without turning to then common images of the unassimilable Japanese. It was this kind of racialized policy—a policy that drew upon a complicated and synthetic logic; a policy that did not lean overtly upon race hatred; a policy that could dispossess the Japanese even as it acknowledged their citizenship—that ultimately would cast a longer shadow in the postwar period, as explicit racism faded from public acceptability. 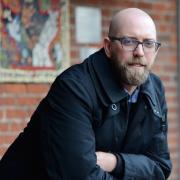 Jordan Stanger-Ross is Associate Professor of History and Chair of the Urban Studies Committee at the University of Victoria. His research focuses on the politics and experience of urban space in twentieth century North America. A Director of the Urban History Association and an Associate Editor of the Urban History Review, his publications include work ethnic neighbourhood and community in Canada and the United States—Staying Italian: Urban Change and Ethnic Life in Postwar Toronto and Philadelphia(University of Chicago Press, 2009)—the entanglement of colonialism with city planning—"Municipal Colonialism: City Planning an the Conflict over Indian Reserves in Vancouver, 1928-1950s," The Canadian Historical Review(2008)—and most recently, the spatial patterns of inequality in Canadian Cities—"Placing the Poor: The Ecology of Poverty in Postwar Urban Canada," Journal of Canadian Studies (2012). His current book-length project "Suspect Properties: Race, Real Estate, and Citizenship in Mid-Twentieth Century Canada" centers on the liquidation of Japanese-Canadian property during the Second World War.