Itinerary for the next series of City Talks, Fall 2019

Check out our Current Lectures page for more information 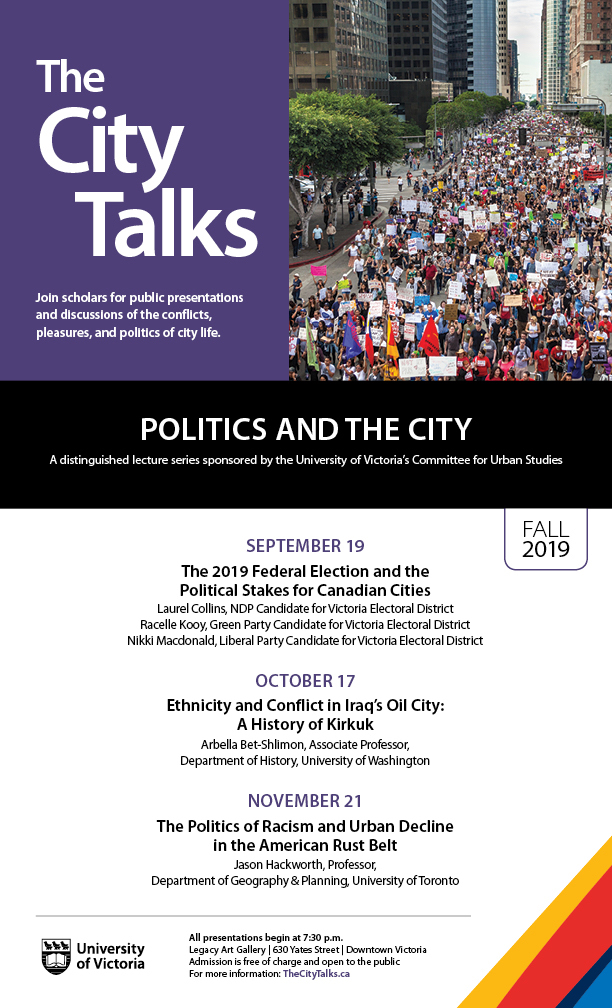 This year marks the 10th anniversary of The City Talks lecture series, which began in 2010 when a group of urban scholars at the University of Victoria established the UVic Committee for Urban Studies.

Politics and the City

September 19: The 2019 Federal Election and the Political Stakes for Canadian Cities

What are the political stakes of the 2019 federal election for Canadian cities? This first City Talks event of the Fall 2019 series will consist of a discussion with four federal candidates running for election in the Victoria Electoral District: NDP Candidate Laurel Collins, Green Party Candidate Racelle Kooy, Liberal Party Candidate Nikki Macdonald, and Animal Protection Party Candidate Jordan Reichert. Each will begin with opening remarks followed by a discussion with the audience moderated by Deniz Unsal (Anthropology, University of Victoria).

October 17: Ethnicity and Conflict in Iraq's Oil City: A History of Kirkuk 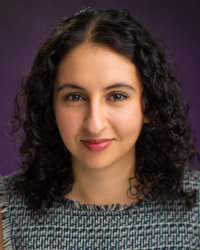 Arbella Bet-Shlimon is Associate Professor of History at the University of Washington. In her research and teaching, she focuses on twentieth-century Iraq and the Persian Gulf region as well as Middle Eastern urban history. Dr. Bet-Shlimon is the author of City of Black Gold: Oil, Ethnicity, and the Making of Modern Kirkuk (Stanford University Press, 2019).

Kirkuk is Iraq’s most multilingual city, for millennia home to a diverse population. It was also where, in 1927, a foreign company first struck oil in Iraq. Kirkuk soon became the heart of Iraq’s booming petroleum industry. Over the decades that followed, oil, urbanization, and colonialism shaped the identities of Kirkuk’s citizens, forming the foundation of an ethnic conflict. In the early 1920s, when the Iraqi state was formed under British administration, group identities in Kirkuk were fluid. But as the oil industry fostered colonial power and Baghdad’s influence over Kirkuk, intercommunal violence and competing claims to the city’s history took hold. The ethnicities of Kurds, Turkmens, and Arabs in Kirkuk were formed throughout a century of urban development, interactions between communities, and political mobilization. Ultimately, this lecture argues that contentious politics in disputed areas are not primordial traits of those regions, but are a modern phenomenon tightly bound to the society and economics of urban life.

The City Talks: Ethnicity and Conflict in Iraq's Oil City: A History of Kirkuk

November 21: The Politics of Racism and Urban Decline in the American Rust Belt 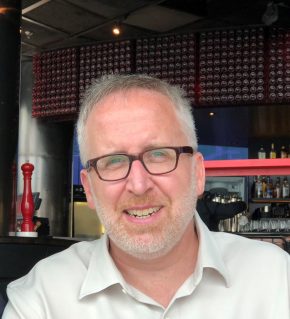 Despite the considerable overlap between the presence of non-white people and generalized population (and capital) flight in a variety of national contexts, the urban decline literature almost entirely ignores race and racism as active causes of urban shrinkage. Most literature focuses on conventional economic explanations (e.g. levels of deindustrialization) and solutions (e.g. reinvention of the economy around a creative class paradigm). This presentation, which is based on material from the book Manufacturing Decline: How Racism and the Conservative Movement Crush the American Rust Belt (2019, Columbia University Press), explores the role of racism as an active cause of urban decline. More than simply being the cause of economic distress, declining cities and their often non-white citizens are actively constructed as virtual bêtes noires to advance conservative political interventions.

The City Talks: The Politics of Racism and Urban Decline in the American Rust Belt